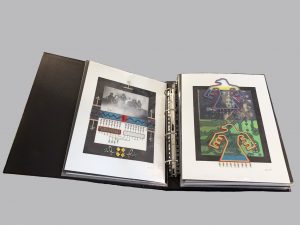 The Covid-19 Series is a suite of 19 mixed media works on paper (27 cm x 34 cm) produced during the coronavirus pandemic and global lockdown that commenced in Canada on March 15, 2020. As a visual artist, Ace was impacted by the epidemic with the cancellation of all upcoming exhibitions, international conference presentations, artist residencies and access to his City of Ottawa art studio. Ace had a short window of opportunity to remove any art supplies from his art studio before the City restricted access. These works were completed at home during several months of self-imposed isolation in his makeshift studio.

This body of work is a self-portrait informed by the pandemic’s impact on Ace and his personal reflections and observations on the history of similar impacts of global pandemics that his family and other Indigenous peoples have lived through in the recent and distant past. Ace’s grandparents lived through and survived one of the most deadly global pandemics on record – the Spanish Flu (1918-1919). The Spanish Flu infected more than 500 million people world-wide and had an estimated mortality rate of between 17 million to 50 million people. In the work Influenza, Ace includes a photo taken by his grandmother Mary in the early 1920s of her younger sister Melvina holding Ace’s father Cecil at the St. Joseph’s Residential school in Spanish, Ontario. Ace’s grandmother Mary and great-aunt Melvina are both survivors of the Spanish influenza pandemic. The text Those who are most susceptible to it… has historical and contemporary relevance in drawing attention to the lack of medical studies on how and why pandemics adversely impact the Indigenous and marginalized communities.

Ace’s Covid-19 Series is a visual response to the current coronavirus pathogen through an intervention of mixed media works comprised of Ace’s manipulated photographs, electronic circuit-board scans, and modified historical portraits of Indigenous personages who survived past global pandemics; such as Maungwadaus (George Henry) (Mississauga) an Indigenous rights advocate, knowledge keeper and performer who travelled with his dance troupe to Europe in 1845, amidst the global smallpox pandemic that took its toll on his dancers and family, as reflected in the work Protection. Sacred symbols of Anishinaabeg power and protection are overlaid on top of these historical and contemporary images: where iconography such as the bnesi (thunderbird) as protector is rendered in manidoominens (glass beads) which translate from Anishinaabemowin to “spirit berries” of energy. The integration of glass beads coalesce with the electronic component (resistors, capacitors, light emitting diodes) floral motifs referencing Anishinaabe beadwork and medicinal plants, and together these glass beads and component floral works are a metaphor for individual and collective healing energy. The electronic circuitry schematic patterns can be read as a fully functioning system and like our global society is in a constant state of vulnerability and susceptible to disruptions, malfunctions, breakdowns or attacks rendering the system damaged or inoperable.

Two works in Ace’s Covid-19 Series are unique. Physical Distance and Presence and Absence are two works on a single sheet of paper and beaded double-sided to reveal both the glass beads juxtaposed with thread stitching that would normally be on the back and not visible. The stitched exposed thread image of bnsei (thunderbird) appears on both sides of the paper and is a homage to the late expat Canadian graffiti artist Richard Hambleton who lived and worked in the Loisaida (Lower East Side) neighbourhood of New York City in the 1980s. Hambleton created startling life-sized shadow portraits on walls and dark alleys throughout Lower Manhattan from Soho to Loisaida. His expressive action-filled black silhouettes called Shadowmen incorporated a splash technique that rendered the image in motion and decay simultaneously.  Throughout the 1980s and early 1990s, Hambleton’s work coincided with the AIDS epidemic and were a stark reminder of the presence and absence of the plague years that devastated and adversely impacted, in particular the LGBTQ2S+ and artistic community of Loisaida, Chelsea and Soho. It is a virus that has not been cured and is still infecting the global community today.

Ace includes a photo-manipulated collage self-portrait in the work Occlude. The mask that partially covers the artist’s face is not a real mask, but a digitally superimposed image of a N95 mask that quickly became a symbol of high level protection during the pandemic and one of controversy due to its limited supply and high demand for front-line health care workers. As well, the wearing of a mask took on a controversial political context in the United States where many refused to wear one and this act of resistance put millions of people at risk of contracting the highly contagious virus. The radiating ripple shadow-wave effect represent the invisible spread of the virus in human to human contact.

Also included in the suite is a work with a single beaded black square. This work is in solidarity with #BlackLivesMatter and the protests that emerged across the United States (and globally) in response to the brutal murder of George Floyd who was handcuffed and asphyxiated by a police officer, along with 3 other officers on May 25th in Minneapolis, Minnesota. People protested en masse for weeks for George Floyd (and many other murdered Black men and women), despite the high risk of contracting Covid-19, to unite and come together to fight another global pandemic – racism.

The COVID-19 Series is a testament to our individual and collective perseverance, tenacity and survival throughout history, and how we have sought new and innovative ways though science, medicine, technology, protest and faith to monitor, manage, troubleshoot and repair dysfunctions and aberrations that occur in our global and interconnected communities.